The Amazing History of the Rubik's Cube 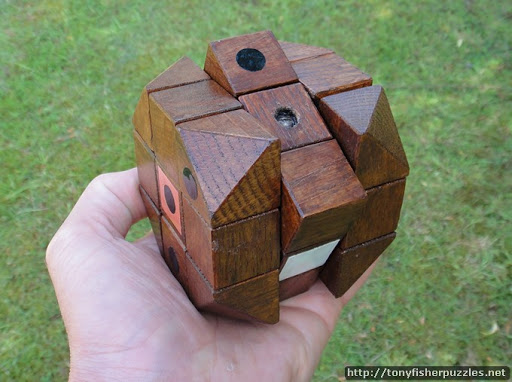 The most critical part of any escape room is the puzzles included. So, we decided to share some information about one of the most famous and fiendishly difficult puzzles the world has ever seen, The Rubik’s Cube! In this first post, we have a look back at the history of the Rubik’s Cube.

Early History of the Cube

Erno Rubik is a Hungarian inventor and architect. He is known, most notably, for his invention of the mechanical twisting puzzle, the Rubik's Cube. Rubik studied sculpture at the Technical University in Budapest and then architecture at the Academy of Applied Arts.

After completing his education, Erno joined the faculty of Architecture at his alma mater, where he became a professor of architecture between 1971 and 1979. It was during this time that he drew up designs and built a prototype of a three-dimensional puzzle. Made of 27 wooden blocks and held together by rubber bands, the Rubik’s cube was born. Created as a task for his students to solve, this puzzle would become a worldwide phenomenon and has over 43 quintillion combinations in which it can be rearranged.

Rubik said in an interview with CNN that;

“Space always intrigued me, with its incredibly rich possibilities, space alteration by (architectural) objects, objects' transformation in space (sculpture, design), movement in space and in time, their correlation, their repercussion on mankind, the relation between man and space, the object and time. I think the CUBE arose from this interest, from this search for expression and this always more increased acuteness of these thoughts…”

The original wooden prototype was built by hand in the workshop at the university by Rubik himself; cutting the wood, boring the holes and threading elastic bands to hold the contraption together. He showed the original puzzle to his students, who appreciated it greatly. With their support and aided by the puzzle’s simplicity, Rubik decided to get a patent, and potentially get his puzzle mass-produced. With his father already holding multiple patents, Rubik was familiar with the process and filed a patent for his invention.

Unfortunately, Rubik struggled to find a company to produce the puzzle due to the Hungarian economy at the time. Eventually, a small company that manufactured chess pieces agreed and the Rubik’s Cube. Then known as the "Magic Cube" it was first available to a wider market in late 1977 (Ruwix.com).

Leaning into the name ‘Magic Cube’, Rubik licensed the name to Ideal Toys, an American company in 1979. Before introducing the puzzle to an international audience, Ideal rebranded the puzzle to the name we are all familiar with today, the Rubik’s Cube. It had taken a lengthy 6-year process from invention to mass production, but Rubik’s persistence had paid off. The invention bearing his name was now available globally!

The Rubik’s Cube became an instant success worldwide, winning many Toy of the Year awards and becoming a staple of 1980’s pop culture. To date, over 350 million Rubik’s cubes have been sold, making it one of the best selling toys of all time (Time Magazine).

The Rubik’s Cube, also known as the 3x3, started a boom of ‘twisty puzzles’. In the Rubik’s ‘family’, there is a 2x2 variant known as the Pocket Cube. This was invented by an American, Larry Nichols in 1970, four years before the invention of the more well known Rubik’s Cube. Nichols assigned the patent to his employer who later sued the producer of the Rubik’s Cube for patent infringement in 1982. In 1984, it was judged that the Rubik’s Cube had infringed Nichols’ patent, however in 1986, the decision was appealed and judged there was no infringement on Rubik’s 3x3 Cube.

Looking at cubes bigger than Rubik’s 3x3, there are both 4x4, named the Rubik’s Revenge and the 5x5, the Professor’s Cube, that were designed and built after the success of the Rubik’s Cube. The 4x4 variant was released in 1981, invented by Péter Sebestény, and was nearly named the Sebestény after himself, but a last-minute change changed the name to attract fans of the original cube. A 5x5 variant was also created in 1981, after the success of the 3x3. Many different people were attempting to design a 5x5 cube, the chosen design was created by Udo Krell, and was first sold in 1983.

Ever since the original patent expired in 2000 (Wikipedia), different companies have started to design and improve on the original design, making bigger and better cubes available for mass production. As of now, on sale, there are cubes from ranging 2x2 to 15x15. For those who fancy it, there’s also 19x19 cube that can be bought for the low, low price of $999.99 (Speed Cube Shop)!

Next time, we look at a completely different topic related to the Rubik’s Cube, speedcubing! We talk about the competitive side of solving Rubik’s Cubes and who holds the ability to solve them exceedingly quickly!