5 Of the UK's Largest Heists 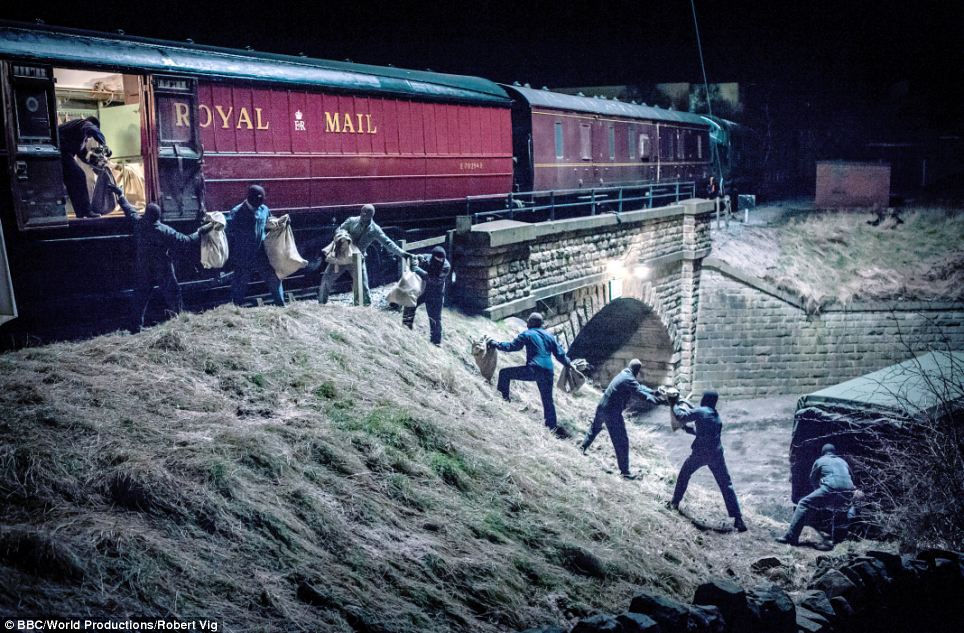 With our new escape game “The Heist” around the corner, we thought we’d take a look at some of the UK’s largest and most famous heists. Some provided inspiration for our escape room and others shocked us.

Arguably the UK’s most famous heist, the Great Train Robbery was a meticulously planned caper; one which was very fruitful…almost. On the 8th August 1963, a gang of 15 men stole nearly £2.6 million worth of notes from a post office train travelling from Glasgow to London.

Using information from a man known only as “The Ulsterman”, the group set out to rob a travelling post-office train. The train was believed to be carrying  nearly £3 million in its high-value package carriage. Usually, the train would “only” be carrying around £300 000, but the previous weekend had been a Bank Holiday which meant there was much more money travelling down to London than usual.

They stopped the train at a red light signal near Ledburn in Buckinghamshire, overpowered the driver and got him to move the train half a mile along to a bridge. Here they proceeded to the HVP (high-value package) carriage, where they beat the staff with metal bars and proceeded to move the money via a human chain into a waiting van (see recreation below). The crew moved 128 sacks in 20 minutes, and even had to leave £131 000 behind so they could escape in time.

Whilst the heist was successful, the crew were caught after their hideout at Leatherslade farm was searched by police a few days later. The plan was for the farm to be torched by one of the team, but the man responsible took £10 000 of the loot and never completed his task. Despite the farm being cleaned, the police searched the farm and found the robbers fingerprints on a ketchup bottle.  Prints were also found famously on a Monopoly board that the gang had used to play Monopoly with real money the night after the robbery.

Most of the crew were arrested with 13 of the 17 suspects serving time in prison for the crime. “The Ulsterman” was never identified.

A Tale of Two Thieves

On 26th November 1983, 20 years after the great train robbery, 6 men broke into the Brinks-Mat warehouse on the Heathrow International trading estate. The group gained entry to the warehouse via a security guard. Once inside they poured petrol over the staff and threatened them with a lit match if they refused to reveal the combination to the vault.The gang expected to steal £3.2 million in cash from the vault but they made away with 3 tonnes of gold bullion as well as diamonds and the original cash, ending up with an eye-watering haul worth over £26 million.

Two of the gang were arrested but most of the crew evaded capture. They melted the gold down and mixed it with copper to hide its true source, before selling it back to the market. The vast majority of the gold has never been recovered, and it’s been said that if you bought gold jewellery made in the UK after 1983 that you are probably wearing gold from the Brinks Mat heist.

The Hatton Gardens Heist is the most recent on our list and although it did not elicit the most money, it did attract a huge amount of media attention. The publicity came with the surprising age of the robbers. The eldest member of the gang, Brian Reader, was 76 when he was arrested for his role in the robbery and the average age of the suspects was 64.

On April 2nd 2015, the Hatton Garden crew broke into the safety deposit vault of the building. It was a Bank Holiday weekend (a popular time for a heist?) and staff locked the doors at around 9:20, and were not due back until the following Tuesday. A few minutes later the crew disabled the communal lift for the building and descended the shaft to the basement vault. They drilled through the thick walls and made a space big enough for one of them to climb through. Over the next two days, they emptied 72 safety deposit boxes and transported them away in a white van.

Most of the crew were arrested and they were sentenced to a combined total of over 43 years for the robbery. They were also ordered to pay £27.5 million or face extra terms in jail. So far only £732 000 has been repaid. Thankfully no one was harmed during this heist, but sadly the Hatton Garden Safety Deposit Company went into liquidation a few months after the robbery.

The Securitas Depot robbery is the largest cash-only robbery in British history. It’s also the most shocking on our list due to the lengths that the gang went to in order to gain access to the money. On the 21st February 2006 Colin Dixon, the manager of the depot, was pulled over by what he believed to be an unmarked police car. He was taken into the car for “questioning” by a man dressed in a police uniform. Once in the back seat, a gun was pulled on him, he was bound and driven to a farm in Kent.

The gang then horrifyingly moved to take his wife and 8-year-old son hostage too. Dressed in police uniforms and employing the same deceptive methods, they managed to convince Mr. Dixon’s wife that her husband had been involved in a car accident and would need to transport her and her son to the hospital to see him. The two duly obliged, convinced by the story told to them. Of course, they were not taken to the hospital but rather the same farm where Mr. Dixon was held captive. He was told by his captors that they would “blow a hole” in one of them if he failed to cooperate.

At 01:00 the next day the family were taken to the Securitas depot, where 14 staff were bound and taken hostage. Wearing latex masks and balaclavas to hide their identity, the gang filled a lorry with over £53 Million of banknotes and had to leave a further £154 million behind as they’d run out of space in their lorry.

The thieves rounded up the hostages and locked them in metal cages before fleeing the scene. The hostages managed to escape when the manager’s 8-year-old son was able to squeeze between the bars and retrieve the key for the cages from another staff member.

Returning to the Kent farm, the gang counted up and divided the money before going their separate ways. Over 36 people have been arrested in connection with the heist. Two of the ring leaders were caught after one accidentally recorded plans for the heist on his phone.

Heist: The True Story of the World’s Biggest Cash Robbery

A street better known for a detective than for criminals played host to a theft on September 11 1971. On the day £3 Million was stolen from the vault of the Lloyds bank. The crew rented a leather goods store 2 doors down from the bank. From here they tunnelled 50 feet, passing under the Chicken Inn restaurant and straight into the vault. To avoid being overheard, they dug on weekends, and once through to the vault used explosives to gain entry.

The robbers were overheard by an amateur radio enthusiast, who notified the police. The police used this information to check the 750 banks within 10 miles of the enthusiast’s receiver. They even searched the Lloyds bank in Baker Street whilst the gang were inside! Fortunately for the thieves, the police believed the bank was secure as the security doors were still locked, so left the bank whilst the robbery continued undetected.

This heist is particularly interesting for its links to other crimes and the conspiracy theories surrounding it. The leader of the Hatton Gardens heist, Brian Reader, was believed to have been behind this heist in Baker Street too. Both of the robberies having a very similar MO. Reader was also linked to the Brink’s Mat robbery after he was convicted for handling stolen goods from the heist in 1986.

The conspiracy surrounding the Baker Street robbery is that the crime was in fact planned by MI5 to recover some compromising photographs of Princess Margaret. Supporters of the theory believe that the press were told not to report on the robbery by the government, and believe that the fact the bank wasn’t searched properly was due to the orders from high up.

The film “The Bank Job” starring Jason Statham is based on the Baker Street Robbery.

We hope you enjoyed reading about these famous Heists! If you want to take the role of thief and have a go stealing a diamond from a jewellery store yourself  then take a look at our newest game “The Heist”.